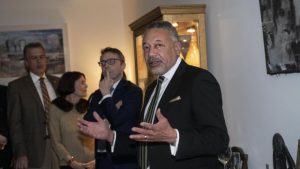 As preparations begin for St Patrick’s Day in the United States, an event in New York this week explored an often overlooked aspect of Irish-American identity.

The Irish consulate in New York hosted a gathering to mark the launch of the African-American Irish Diaspora Network, a new forum that aims to explore the links between Irish and African-American identity.

Though precise figures are difficult to establish, it is estimated that up to 38 per cent of African-Americans have Irish ancestry.

Welcoming guests to the event, consul general Ciaran Madden explained the impetus behind the initiative. He recalled how, on arriving in New York in 2017, he soon realised that each event he hosted or addressed was almost exclusively white.

The aim of the initiative is to examine the connections between black identity and Irishness, in the process opening up a dialogue about definitions of Irish-American identity.

Among those who spoke at the event was Dennis Brownlee, an African-American who will head the organisation. He learned about his Irish heritage while growing up in Cleveland, Ohio, in the 1960s. Click HERE to read more.