Feature documentary, Shooting the Mafia, is playing now in the Ritz at the Bourse. This documentary has been produced by Co. Mayo based film maker, Niamh Fagan.
https://www.landmarktheatres.com/philadelphia/ritz-at-the-bourse/film-info/shooting-the-mafia
The film had its World Premier at Sundance, and European Premiere at the Berlin Film Festival. Its now on release in the US, UK and beyond. 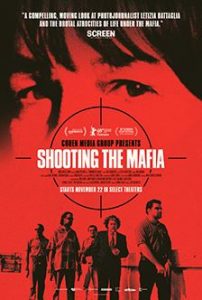 https://www.landmarktheatres.com/philadelphia/ritz-at-the-bourse/film-info/shooting-the-mafia
Some reviews:
https://www.newyorker.com/goings-on-about-town/movies/a-beautiful-day-in-the-neighborhood
https://www.latimes.com/entertainment-arts/movies/story/2019-11-21/shooting-the-mafia-review
https://www.independent.co.uk/arts-entertainment/films/features/martin-scorsese-the-irishman-gangsters-hollywood-goodfellas-mafia-a9174961.html
The press release: SHOOTING THE MAFIA
Kim Longinotto’s Portrait of a Courageous Photojournalist Who Fought the Sicilian Mafia with Her Camera
Director: Kim Longinotto
Producer: Niamh Fagan
Country of Origin: Ireland
Photographer Letizia Battaglia began a lifelong battle with the Mafia when she first dared to point her camera at a brutally slain victim. A woman whose passions led her to abandon traditional family life and become a photojournalist in the 1970s, Battaglia found herself on the front lines during one of the bloodiest chapters in Italy’s recent history. She fearlessly and artfully captured everyday Sicilian life—from weddings and funerals to the grisly murders of ordinary citizens—to tell the narrative of how the community she loved in her native Palermo was forced into silence by the Cosa Nostra. Weaving together Battaglia’s striking black-and-white photographs, rare archival footage, classic Italian films, and the 84-year-old’s own memories, SHOOTING THE MAFIA paints a portrait of a remarkable woman whose bravery and defiance helped expose the Mafia’s brutal crimes.
Shooting the Mafia is unusual in the documentary world, in that the film was originated by the producer, Irish woman Niamh Fagan. Having discovered Letizia’s photographs in the Anti-Mafia Museum in Corleone, she first approached Letizia, and then Kim Longinotto. Kim directed, Niamh produced, and Letizia steals the show.
Shooting the Mafia offers a timely counter to the Hollywood Mafia narrative.
“Director Kim Longinotto’s unerring eye for a great subject is underlined by Shooting The Mafia… [Letizia Battaglia’s] personal story, and the wider picture of a society living in
fear, make for a compelling and moving documentary.”
– Allan Hunter, Screen International
“[A] wonderful film. An intimate portrait of Letizia Battaglia, an exceptional woman whose photography of the chaos sown by the Mafia helped bring change to Sicily.”
– Kenneth Turan, Los Angeles Times
97 mins.
Production Company: Lunar Pictures, Westport, Co. Mayo.