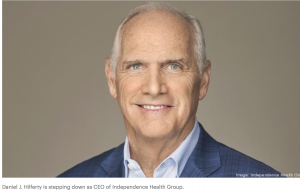 Independence Health Group CEO Daniel J. Hilferty will retire from the position on Dec. 31, ending a 10-year run in which he’s overseen a wave of growth at the region’s dominant insurer and emerged as one of Greater Philadelphia’s most influential business leaders.

Gregory E. Deavens, currently executive vice president, CFO and treasurer of Independence, will assume the role of president and CEO effective Jan 1. Hilferty, 64, will remain in an advisory capacity through the end of 2022.

Deavens, 59, joined Philadelphia-based Independence Health Group, the parent company of Independence Blue Cross, in 2017. He was previously a corporate controller with MassMutual and also held the role of CFO for its U.S. insurance business from 2006 to 2012. Deavens’ resume includes senior finance roles at New York Life, Cigna and GE Capital.

He will become the first Black CEO of Independence in the company’s 83-year history.

“It definitely is a historic milestone,” Deavens said in an interview.