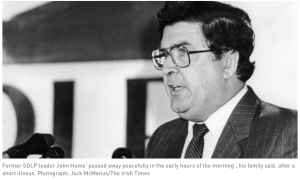 The current SDLP leader Colum Eastwood described him as Ireland’s “most significant and consequential political leader” of the 20th century.

Mr Hume, who spearheaded the finally successful efforts to end the violence of the Troubles and who is viewed as the architect of the 1998 Belfast Agreement, was in a nursing home and had been ill for a long time.

He is survived by his wife Pat and children, his children Terese, Aine, Aidan, John and Mo, his brothers and sisters and grandchildren.

END_OF_DOCUMENT_TOKEN_TO_BE_REPLACED

Blog on John Hume, an Irish peacemaker and European statesman 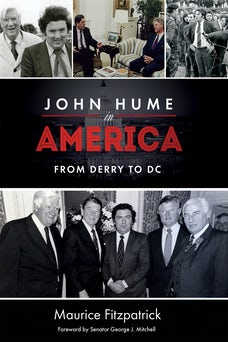 “The European Union is the best example in the history of the world of conflict resolution” – John Hume in the European Parliament, 4th of May 2004

Throughout last year, I was involved in a number of events marking the 20th anniversary of the Good Friday Agreement of 1998. That anniversary represented an important opportunity to remind people of what was achieved in 1998 and of its legacy in the form of two decades of peace in Northern Ireland as well as greatly improved relations on the island of Ireland, and between Ireland and Britain.

One political leader from that time who, I believe, deserves special credit is John Hume, who was a deserved recipient, alongside David Trimble, of the 1998 Nobel Peace Prize. I have been involved in a number of discussions following the screening of Maurice Fitzpatrick’s documentary film, John Hume in America, most recently in Hartford, Connecticut, at the invitation of Congressman John Larson and last year in Springfield with Congressman Richie Neal, who chairs the Congressional Friends of Ireland. I have also reviewed the book that accompanied the film for the Irish Times.

END_OF_DOCUMENT_TOKEN_TO_BE_REPLACED

Over sixty leaders of the Irish American community have signed on to a letter mourning the death of Congressman John Lewis and have called on Irish America not to sit on the sidelines as America seeks to end racial discrimination.

The community leaders, according to a release, represent Irish America’s broad civil, political and educational community and have banded together to mourn the passing of Congressman John Lewis.

END_OF_DOCUMENT_TOKEN_TO_BE_REPLACED 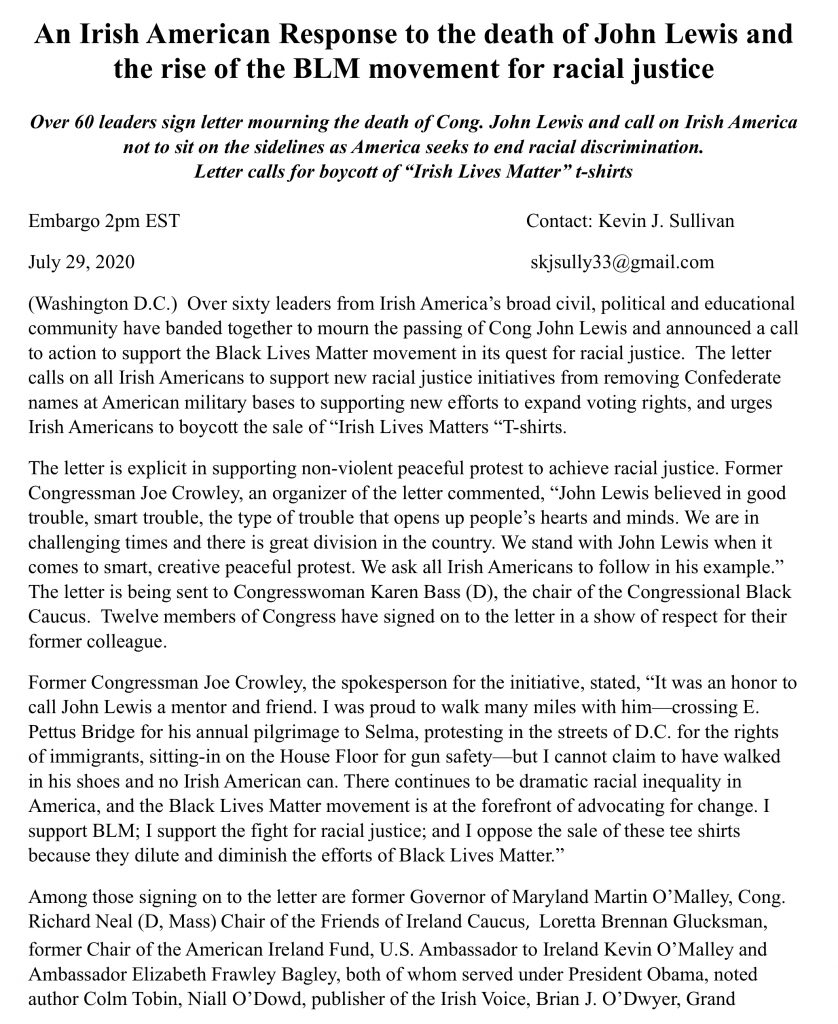 Exports of pharmaceuticals, dairy goods and drinks are reaching American markets at record speed by sea since the launch of Ireland’s first direct shipping cargo link to the US.

John Kirkland, managing director of Independent Container Line (ICL), confirmed it is winning business from other routes since launching its weekly service from the deep-sea terminal at Ringaskiddy, Co Cork, bound for the US port of Chester, south-west of Philadelphia.

It is the first direct container service to the US from Ireland.